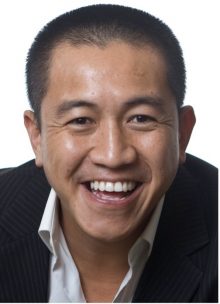 Anh Do is a Vietnamese born Australian author, comedian and artist. He has appeared on many Australian TV shows such as Thank God You’re Here, Good News Week, Anh Does Vietnam and was runner-up on Dancing With The Stars. His first book, ‘The Happiest Refugee’, won Australian Book Of The Year and each of his children’s book series have been national bestsellers. As an artist, Anh has won numerous awards including People’s Choice for The Archibald Prize. Each year he tours Australia performing his comedy show, ‘The Happiest Refugee Live’. He is also an in-demand corporate speaker. Anh studied a combined Business Law degree at the University of Technology, Sydney.  He is the brother of film director Khoa Do and has acted in several of Khoa’s films, including Footy Legends, which he co-wrote and produced.

Anh arrived in Australia at age 3 on a small fishing boat packed with 47 other Vietnamese refugees. Having survived pirate attacks, dehydration, and internment in a Malaysian refugee camp, young Anh came through this adversity with a determination to make the most out of life. No one had any idea, including Anh himself, that he would go on to become one of Australia’s best-loved entertainers!

An entrepreneur through childhood (during which time he bred and sold tropical fish), as a young man Anh went on to study Business Law. Six months shy of finishing his double degree, and with multiple offers from various law firms on the table, he opted instead for a far more stable and sensible job as a comedian.

Since deciding to pursue his true calling, Anh has never looked back. He went on to bag every comedy award in town, including Sydney Comedian of the Year, and was soon able to fulfil his lifelong dream of buying his mother a house. He’s played to sell-out crowds at the Melbourne International Comedy Festival and Sydney Opera House, and appeared on TV shows such as Rove Live, Spicks & Specks, Thank God You’re Here, and The Footy Show. He was a grand finalist on Dancing with the Stars, on which he was a huge favourite with the voting home audience. This saw him offered his own TV show, Made in China with Anh Do, an Olympics special which rated through the roof. Off the back of this, Anh produced the highly successful Anh Does series with Channel 7.

As an actor, he has appeared in Aussie TV favourites such as Seachange, All Saints and Pizza. He has also starred in the movie Footy Legends, and in 2003 he co- produced The Finished People, which was described by Margaret Pomeranz as ‘one of the best Australian films of the year’.

Anh has written other books since, including the nationally best-selling Weir Do and Hotdog series for children.

Recently, Anh has been exploring his passion for art. In 2016 he created Anh’s Brush with Fame for the ABC, a program in which Anh interviews a celebrity while painting their portrait. The show has been a phenomenal success, and continues, now in its fourth season, to this day. He has also twice been nominated for the Archibald Prize, and took out the People’s Choice award 2017.